Whistles symbolize fun, happiness and a carefree attitude. Bird’s chirp when happy, we whistle to express ourselves. May not be music to others! 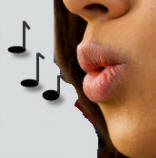 Whistling is ubiquitous in hindi movies and in the songs as well. Sometimes it comes as a part of ‘Chhed-Chhad’, some times of romance!
Many a times whistling is a part of hero’s introduction song, where he is shown to whistle happily, either walking or riding a bicycle, or driving a car!
It’s very pleasant to hear the whistling sound as a part of interlude or prelude, where it may accompany ringing bicycle bells or something other having a pleasant tone!
A couple of famous songs, that we can remember are, Chhod Aaye Hum Woh Galiyan from Machis and Chand Sifarish Jo Karta Hamari from Fanaa.
Of course, I can’t include the songs, as these are out my blog’s timeline.
Here, I have tried to compile a list of hindi film songs, where whistling forms a significant part of the song or at times, identity of the song.
I have not included, songs having whistling only for a few seconds, may be at the end or the beginning. (So I couldn’t include my favourite, ‘Tum Pukar Lo’ from Khamoshi)

My ten favorite hindi songs having whistling, from pre 1970s films. The songs are in no particular order.

1. Sawan Ke Nazare Hai- Khajanchi (1941) Shamshad Begum, Khan Mastana & Chorus / Ghulam Haider- Walisaheb
Perhaps the first hindi film song with whistling tune in it! This song is considered as path breaking, in many respects. It was the first of its kind to show a bicycle trip, a little bold for the period! And the style of music was also refreshingly new. The song became a trend setter. It’s not heavily influenced by classical music that you could hum casually.
Quite an enjoyable song with whistling in interludes.
Shamshad was the main singer for the film, and she has done excellent job in all the songs from this movie. Representatives whistle song from the 1940s!

2. Hum Panchhi Mastane- Dekh Kabira Roya (1958) Lata Mangeshkar & Geeta Dutt / Madanmohan- Rajendra Krishna
Here we find the ladies whistling happily along the roads of Old Bombay (Marine Drive). This song has innocence, its full of colorful dreams and hopes for the future!
Shubha Khote always looks gorgeous in black and white movies! But to watch a young Anita Guha, laughing and dancing, seems a bit difficult to digest! I’ve always seen her in characters like a Godess or a weeping old woman.
I don’t know why third heroiene, Amita, was not included in the song, even though a third singer, called Seeta Agrawal is also sometimes mentioed in connection with the song. The whistling in this song has become an identity of the song and it’s very exciting to listen to it.

3. Chale Bajate Seeti- Zamana (1957) Asha Bhosle & Anil Biswas / Salil Choudhari-Indeevar
A lesser known song, picturized on Amita. We see happily travelling hero-heroine on the bicycles, in the song. Actually the only song on my list, that actually mentions whistling! The sound of ringing bicycle bells adds more sweetness to the melody.

4. Aanchal Ko Udane Do- Picnic (1965) Asha Bhosle & Chorus / S Mohinder- Majrooh
S Mohinder is a telented music director and has given memorable melodies to hindi films. He is never counted amongst popular music directors, though he has a musical superhit ‘Shirin Farhad’ to his credit. I think he mainly worked for low budget films, or B grade films, as they were called! This particular song has a very freshening touch to it, Asha’s voice just lingers through out the song. Listening to this exhilarating song takes us back to college days. Click here for the video.

5. Hay Unki Woh Nigahein- Aakhari Dao (1958) Asha Bhosle / Madanmohan-Majrooh
A song picturised in a car on Nutan. Nutan is seen enjoying the ride with Shammi, the latter whistling throughout the song!
The hero, Shekhar is driving the car, making funny faces, as though Nutan may attack him any time! The central theme of this movie is very appealing, but alas, I am yet to watch it!
The whistling reminds me of the songs from Nou Do Gyarah. The tune and orchestration also resembles O P Nayyar at places.
A Very different song from Madanmohan’s usual style. The Asha-Madanmohan combo always surprises us,( consider Saba Se Ye Keh Do- Bank Manager)

6. Kisi Ki Muskurahathon Pe Ho Nisar- Anari (1959) Mukesh / Shankar Jaikishan- Shailendra
Very popular and meaningful song From Anari, with a philosophical touch. It helps to build the image of the character, played by Raj Kapoor in the movie. The whistling part has a certain similarity with the interlude of ‘Mujh Ko Baar Baar Yaad Na Aa’ from Ragini.

8. Aankhon Mein Kya Jee- Nou Do Gyarah (1957) Asha Bhosle & Kishore Kumar / S D Burman-Majrooh
We hear whistling in majority of the songs from the movie. ‘Hum Hai Rahi Pyar Ke’ was a part of my last post and I didn’t want to repeat it, when I had an equally best option. A romantic song with elements of ‘Chhed-Chhad’ in it. Plenty of whistling to listen to!

9. Yeh Kya Kar Dala Tune- Howrah Bridge (1958) Asha Bhosle / O P Nayyar-Qamar Jalalabadi
Another O P number after the song from Basant, and Asha’s sixth song in the list. Catchy, peppy numbers was one of her forte. A romantic song, picturised on beautiful Madhubala And manly Ashok Kumar. It’s one of my favorite songs from the movie. The song is partly picturised in a Ghoda Gadi and partly on a boat sailing on Hugali, near Howrah Bridge.
I think, thats why, this song has no typical ‘Tanga Rhythm’ so much made popular by O P Nayyar.

10. Yeh Sham Mastani- Kati Patanag (1970) Kishore Kumar / R D Burman-Anand Bakshi
One of the most popular songs by Kishore Kumar R D Burman, and Rajesh Khanna trio. Nothing more to say about the song. A fine, relaxing song, very much enjoyable in the evening with ‘Humsafar’. Click here for video.

25 Replies to “Hindi Songs With Whistling”