My series based on boat songs was on hold for a while. The last part was dedicated to songs sung by a boatman.
While I was exploring the boat songs, I came across a few songs where there was a group of boats. 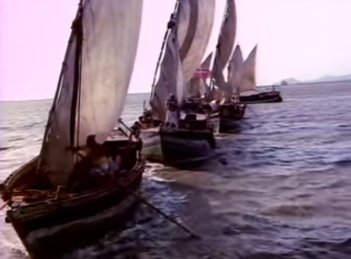 The group was of many boats in a few songs, while a few songs had only two groups. 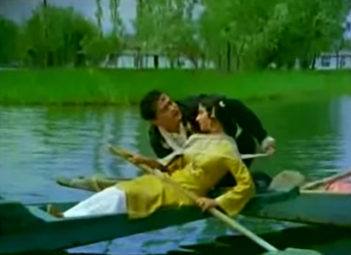 In some songs, the main leads were traveling alone in separate boats. So I thought of having a separate category. There are a couple of parts more in the ‘boat songs series’.

Today’s list has both the categories. I saw to it that at the majoirty of the song would be picturised on a boat. It’s such a pleasure to watch these boat songs. So here we sail……..

1. Pighla Hai Sona – Jaal (1952) Lata Mangeshkar & Chorus / S D Burman – Sahir
The song describes a beautiful evening. Very impressive and lively words. The lines come alive as Lata sings it. The evening sky with the setting sun is compared to melting gold, as the sun spreads the last rays of the day. A very melodious song to start the list.
The film had a goan background and it’s about fishermen. So there is a small group of boats sailing in the sea. The longshots are on a real outdoor location, on a seashore. But the close-ups are very obviously shot indoors. There are actually three people on the boat, but they are never shown together during the song.

2. Us Paar Sajan – Chori Chori (1956) Lata Mangeshkar, Manna Dey & Chorus / Shankar Jaikishan – Hasrat Jaipuri
This one’s actually a perfect song for today’s post. In fact it was the first song I added to the category before I started looking for other befitting songs. The fishermen are sailing on a group of boats, all singing in sync. The singing actress is identified as K V Shanthi, on tommydan’s channel. Nargis swims near a boat to finally get hold of a rope attached to one of the boats. The song, though sung by a fisher woman, actually portrays emotions of the character played by Nargis, who elopes from a boat to reach her beloved.

3. Naiya Jaldi Le Chalo – Tulsidas (1954) Rafi & Chorus / Chitragupt – G S Nepali
The song is opened by the boatman who’s traveling with Tulsidas. The fishermen and women are sailing in other boats, apparently trying to catch fish, but mostly singing the chorus part. Tulsidas has bought bangles for his wife and he is happily singing the song, requesting the boat itself to hurry. Rafi sings for both the boatman and Mahipal, but it sounds as if he sings with a slightly different tone for the boatman.
The song is really very melodious, even if it is from a religious film. Chitragupt was still struggling in the sense, he was not a choice for social films of prestigious banners. Of course he was composing good songs throughout. The female singer in the opening part of the song is perhaps Asha Bhosle, but she has just an aalap.

4. More Saiyan Ji Utrenge Paar Ho – Udan Khatola (1955) Lata Mangeshkar & Chorus / Naushad – Shakeel Badayuni
I was actually going to add this song in one of the later parts, where a group of boats (is it appropriate to call it a flotilla?) is seen in the picturisation. But the main boat carrying Raj Rani, played by Surya Kumari and Dilip Kumar has three people. The third person is actually Nimmi, disguised as a male boatman. But if so, how does she sing in a female voice? But anyways, the song is extremely melodious and one of my favorites. The other boats are fully loaded with people, who provide an excellent chorus throughout the song. But the way Nimmi rows the boat, it will take ages to cross the river. Anyways, the boat collides with an obstacle in the end to lead all three of them into the river.

5. Jhuk Jhuk Jhola Khaye – Do Behene (1958) Lata Mangeshkar, Mahendra Kapoor & Chorus / Vasant Desai – Kavi Pradeep
Chand Usmani is hanging out with her friends near a river. She sings a song while waiting for her mate. It was a surprise to see a young and dashing Ram Mohan in the song, who doesn’t get to sing much. But he and his team sail on boats forming a separate group. Their boats finally collide (? premeditated), and Ram Mohan at once jumps into the river to save her. The chorus backed song is pleasant to listen to.

7. Machalti Hui Hawa Mein – Ganga Ki Lehren (1965) Lata Mangeshkar, Kishore Kumar & Chorus / Chitragupt – Majrooh
The song describes the sanctity and eminence of the Ganges. The team of girls led by beautiful Kumkum are sailing on rafts, while Kishore Kumar and team have a proper boat to sail. The girl’s team gets down in the river and dances, but the boys continue sailing on the boat. In the end girls end up on a boat as well. What a melodious song!

8. Hum Chale Door – Ek Thi Ladki (1949) Lata Mangeshkar, Rafi, Satish Batra & Chorus / Vinod – Aziz Kashmiri
This one’s a comparatively less popular song of the movie. But I think it’s the only Hindi film song based on a ‘boat rhythm’. If you listen carefully, the song has sounds of rowing, mixed with the sound of water. The couple, Motilal and Meena Shorey, are traveling on a shikara and the boatmen are singing a song. They are talking about going away from home, while a group of ladies sailing in another boat reply to it. In the end the traveling couple adds their own story to it. There’s definitely a fourth voice in the song, though it’s popularly believed to be a trio. My guess is that the fourth singer could be Zeenat Begum or Sulochana Kadam. If anyone knows about it, please add the information.

9. Chandan Ki Naiya Pe – Durgesh Nandini (1956) Lata Mangeshkar & Chorus / Hemant Kumar – Rajendra Krishan
This is such a sweet melody! The song starts rather suddenly after a prolonged prelude. Bina Rai and her sahelis led by Nigar Sultana are sailing on two separate boats, the former rowing the boat herself. Pradeep Kumar is riding a horse, roaming around the river. Though the song is lip synched by Nigar Sultana, majority of the time, the camera focuses on Bina Rai and her beautiful expressions. I am not her fan, but she does look gorgeous.

10. O Pardesi Chhora – Savera (1958) Lata Mangeshkar & Chorus / Shailesh Mukherjee – Shailendra
It’s such a different song! The tune sounds Indian, but the interludes are westernised. The dancers also perform a western style. There are mainly a couple of boats, one with the lead pair, Meena Kumari and Ashok Kumar, and the other carrying the troupe. I couldn’t recognize the main dancer, though her face resembles that of Sheila Vaz.

11. Aaja Aayi Bahar – Rajkumar (1964) Lata Mangeshkar / Shankar Jaikishan – Shailendra
I’m very fond of this song. The song starts with a melodious blasting of the orchestra. Then it suddenly takes a back foot, and violins start playing. Sadhana and her sahelis are enjoying a ride on rafts in a river. For most of the time, she travels on the raft, to enter the river for the last verse. Shammi Kapoor and Rajendra Nath enjoy the view from afar, the former bursting out with enthusiasm.

12. Purvaiya Leke Chali Meri Naiya – Do Jasoos (1975) Lata Mangeshkar, Shailendra Singh & Chorus / Ravindra Jain – Hasrat Jaipuri
And a melodious song from the 70s to end today’s list. A group of boats traveling in a chain with a big ship and a police boat in the vicinity. It was Shailendra Singh’s debut as an actor, while the actress, Bhavna Bhatt also debuted in the movie. The song is really very good and I think it was very popular at the time. The song opens with Marathi lines, and soon Lata Mangeshkar takes over. Enjoy the song!

With these songs I end my list. There are a few more songs which I left out.