Welcome to the second part of the series dedicated to non-film songs (NFS) by Lata Mangeshkar.
Last part had songs till 1965. Today I will take up the next 10 years, up to 1975. It was a sort of an era of transition. Shankar Jaikishan were slowly losing their magic, Kalyanji Anandji had few hits too. Laxmikant Pyarelal scored their first century with Parasmani and Lata Mangeshkar supported the duo throughout. In short the veteran composers had their heyday in the 50s and slowly a newer generation of composers rose to the horizon. With the beginning of the new decade, the majority of the stalwarts were on the backfoot, with a fresh team of composers taking up the job. Of course this is about the film songs. 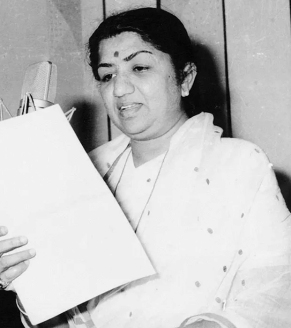 1. Sanwara Re Mhari Preet (1968) / Hridaynath Mangeshkar – Meerabai
A divine experience listening to Meerabai bhajans sung by Lata Mangeshkar. The song is full of flute pieces in the interludes and it also follows the singer’s voice in the verses.

Before we listen to a couple of Ghalib ghazals, let’s experience a beautiful song depicting the beauty of nature.

3. Ghiri Ghatayen Aasman Par (1969) / Hridaynath Mangeshkar – Sumitra Lahiri
The song starts with enchanting Santoor pieces that create the exact mood of the monsoon and again wonderfully played flute pieces add to the beauty. To top it all, what beautiful lyrics! A complete package. I couldn’t get any information about Sumitra Lahiri.

Lata Mangeshkar sang a few Ghalib ghazals under the baton of Hridaynath Mangeshkar. I think a total of 9 or 10 songs were recorded. Though now we do appreciate the beautiful rendition, it wasn’t much appreciated at the release. The ghazal boom that started in the 80s came too late for this album. I’ve selected a couple of songs from the album. Those who are well acquainted with Hridaynath Mangeshkar’s style of composing won’t be surprised with the difficult way of singing.

4. Rone Se Aur Ishq Mein (1969) / Hridaynath Mangeshkar – Mirza Ghalib
Sung very brilliantly and composed wonderfully, the song is adorned with enchanting Sarangi pieces in the prelude and interludes. I had to search the majority of the words to understand the ghazal. Gosh! Was an exercise! The tune of the song is somewhat similar to a song from Lekin.

5. Hazaaron Khwahishen Aisi (1969) / Hridaynath Mangeshkar – Mirza Ghalib
Another captivating ghazal. In contrast to the earlier song, where the Sarangi pieces are brighter, this one has Sarangi pieces that underline the pain and distress in the song. As I’m used to listening to G M Durrani’s rendition, I am familiar with this one. So I could decipher the meaning. Hridaynath Mangeshkar has composed it in his own style, indeed every singer who has sung this ghazal and every composer who set it to tune, must have had his own perspective of the ghazal.

Now, I’ll share a couple of songs composed by Jaidev. Jaidev couldn’t get the due he deserved. He always stuck to melody and composed ace songs, though his songs couldn’t be popular in general. I must confess that I wasn’t aware of these songs and heard these songs for the first time while compiling the list.

6. Satyamev Jayate (1971) with Chorus / Jaidev – Uddhav Kumar
A very beautiful song, which was actually based on one of Jaidev’s songs he composed for a Kannada movie, Kalpavriksha. The song is backed by a chorus and the tune is very pleasing. It’s a motivational song.

7. Jo Samar Mein Ho Gaye Amar (1971) / Jaidev – Pandit Narendra Sharma
It seems both these songs were released on a single EP record in 1971 after the Bangladesh war. A heart touching rendition by Lata Mangeshkar. Another version of the song, sung much later, is also available, though the original one leaves a deep impact.

Next couple of songs are composed by K Mahaveer. I had included a couple of songs in my series on Lata’s association with lesser known composers. He was an ace musician from Rajasthan, who didn’t get opportunities in films. But a few of his non-film songs are available on the net and most of the songs are still appreciated by music lovers. Four of his songs sung by Lata Mangeshkar are available and are considered among one of her finest songs. A couple of songs were on my earlier list. Here are the remaining two.

9. Sanjh Bhai Ghar Aaja (1973) / K Mahaveer – Abhilash
A song describing feelings of a lady away from her beloved. Beautifully rendered and composed. K Mahaveer indeed had the potential to compose impressive tunes.

In addition to the earlier Meerabai bhajans, a set of 15+ songs were released under the name, Chala Vahi Des. Though the album has 20+ songs, a few of the older songs seem to have been included in it. It was difficult to choose, but I finally went for a couple of songs. I think the choice would appear too obvious.

10. Ud Ja Re Kaga – Chala Vahi Des (1974) / Hridaynath Mangeshkar – Meerabai
Though the song is a bit slow paced, I like it. It depicts the pain of separation in a haunted way. Wonderfully sung of course.

11. Chala Vahi Des – Chala Vahi Des (1974) / Hridaynath Mangeshkar – Meerabai
A good song. The song tugs at patriotism and inspires you to go to your own country. It doesn’t matter if you’re wearing an orange saree or saffron colored clothes.

And, to end today’s part, let me present a special song.
Shiv Kalyan Raja (शिवकल्याण राजा) was actually a Marathi album composed by Hridaynath Mangeshkar with songs sung by Lata Mangeshkar. It was actually a collection of songs by different poets and saints. In addition to Sant Ramdas and स्वातंत्र्यवीर सावरकर, a couple of songs by one of the stalwarts of Marathi literature, वि वा शिरवाडकर (कुसुमाग्रज), were also included in it. A couple of songs were in Hindi, hence I included one of the songs here on today’s list.

12. Kund Kaha Paya Vrind Kaha – Shiv Kalyan Raja (1974) / Hridaynath Mangeshkar – Kavi Bhushan
Kavi Bhushan was originally with Chhatrasal, the king of Bundelkhand. He was originally from Uttar Pradesh and his elder brothers were poets too. Kavi Bhushan was a name given to him and wasn’t his original name. He met Shivaji Maharaj in Agra and later moved to Maharashtra in the 1670s in Shivaji Maharaj’s court. A couple of his poems were included in the album.

Before I sign off, I want to thank Dr Ravindra Shrikhande for helping me in this post as well. I appreciate his efforts in finding every possible detail of a song and providing me with the information.

Would you add a song keeping in mind the timeline?