Last month I started the series on Boat songs. As I was not sure to complete the series in a month, I decided to publish the parts as per my convenience. As I went through the boat songs, I could think of dividing those into several categories.

The first part was about the boat songs picturised on a couple, where no third person was present. I had named it ‘two is company’. If you know how the saying goes, I think it would be easy to guess what today’s part is about!

Three is a crowd

By that, I mean there would be three or more people on the boat. But a small crowd, say at the most five – six people. One of them could be the boatman or another passenger on the boat. It could be a solo or a duet or otherwise. As I’m planning a separate part on boatman’s songs, today’s list won’t have the song if it’s a solo, sung entirely by the boatman. Also if the boat carrying the singing characters is a part of a group of boats, I have not included the songs on today’s list. 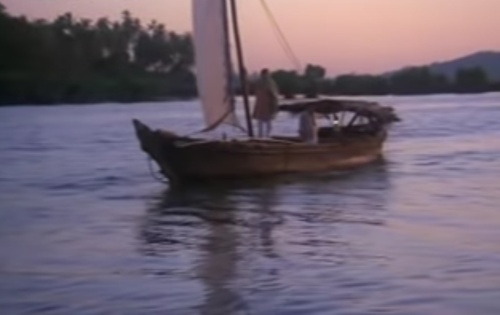 So, here we row, boat songs picturised on a small crowd travelling on the boat.

Woh Dekhe To Unki Inayat – Fantoosh (1956) Asha Bhosle & Kishore Kumar / S D Burman – Sahir
That’s the first song I remembered while compiling the list. Incidentally it was also mentioned by Dustedoff in her comments on the first part of the series. It’s a very melodious song with subtle orchestration. I couldn’t recognize the third person on the boat, who perhaps sang for himself in the song. Dev Anand looks handsome and is easy on the eyes. Sheila Ramani looks good and has a close resemblance with Aishwarya Rai. It’s a great song to start today’s list.

Dil Ne Phir Yaad Kiya – Dil Ne Phir Yaad Kiya (1966) Rafi, Mukesh & Suman Kalyanpur / Sonik Omi – G L Rawal
The song is very popular and is one of the prominent trios sung by Suman Kalyanpur. It’s also one of the most popular boat songs from Hindi films. The story of the film is somewhat unconvincing, but the soulful song is my favourite for decades. In addition to fine renditions by the singers, the picturesque lake and the beautiful nature surrounding it are other attractions.

Woh Sham Kuchh Ajeeb Thi – Khamoshi (1969) Kishore Kumar / Hemant Kumar – Gulzar
Rajesh Khanna recovering from acute mania and falling in love with Waheeda Rehman, who actually herself slowly falling prey to depression. She continues to think about Dharmendra, though she is with Rajesh Khanna. Her acting is top notch, the sadness in her eyes is something that speaks for itself.
I was actually going to add this one on my previous list, when I realised the existence of a boatman who appears in the frame in the last half minute or so, qualifying the song for today’s post.

Kuchh Aur Zamana Kehta Hai – Chhoti Chhoti Baatein (1965) Meena Kapoor / Anil Biswas – Shailendra
A song beautifully rendered, impressively written and wonderfully woven in a melody. It’s one of the few masterpieces of old Hindi film songs. Nadira travelling on a boat accidentally comes across a drowning man. The boatman saves the latter, who’s Motilal. Their initial conversation and the song is precisely used in the movie, to build the character Nadira plays in the movie. In the absence of the preceding scenes, the presence of third man, the boatman, would never be appreciated.

Majhi Chal O Majhi Chal – Aaya Sawan Jhoom Ke (1969) Rafi / Laxmikant Pyarelal – Anand Bakshi
Now, this is what I should call a crowd, as far as today’s post is concerned. There are around seven to eight people on the boat. The team of boatmen has three people in most of the shots, whereas a fourth man is visible in some of the shots. It’s a good song, with a touch of philosophy and optimism. Can’t say much about the song as I don’t know the context or the situation. Please click here to watch the song on YouTube.

Chingari Koi Bhadke – Amar Prem (1972) Kishore Kumar / R D Burman – Anand Bakshi
One of the most popular songs of Kishore Kumar picturised on Rajesh Khanna. A couple in the boat with a couple of boatmen. Anand Bakshi has really penned very good and meaningful songs for this film. Follow the link to watch on Youtube.

Dil Aisa Kisi Ne Mera Toda – Amanush (1975) Kishore Kumar / Shyamal Mitra – Indeevar
The song describes the agony of the character played by Uttam Kumar. It’s one of the popular songs of Indeevar, in fact it’s the one he received the Filmfare best lyricist award for. It’s actually a motorboat, the driver can be seen in a few shots. Follow the instructions to watch it on YouTube.

Do Lafzon Ki Hai Dil Ki Kahani – The Great Gambler (1979) Asha Bhosle, Sharad Kumar with Dialogues by Amitabh Bachchan / R D Burman – Anand Bakshi
A perfect song to end today’s list. The couple is enjoying a ride on a gondola in Venice of course. The boatman sings the initial few lines in Italian, which is further elaborated by Zeenat Aman as she explains the song to Amitabh Bachchan. The song is very popular and is one of my favourites too.

Would you add a song?