Sunidhi Chouhan is one of the talented and versatile singers of Bollywood. I’m a big fan of her voice. How should I describe it? It’s at times husky, at times raw, but yet very appealing to ears. She can sing softly, even her whispering is awesome. Today on her birthday, let’s listen to some of my favourites sung by Sunidhi Chauhan. 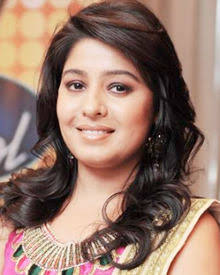 Though her initial songs were not extremely popular, she got recognition very soon.
Her first Bollywood song was ‘Ladki Deewani Dekho Ladka Deewana’.
The song wasn’t very popular, but her first breakthrough song was, Ruki Ruki Thi Zindagi from Mast.
In one of her interviews, she has shared her struggle in her initial days. She was advised by a composer to pack her bags and go home as she couldn’t sing Lag Ja Gale in the original scale. She has also shared an incident when a composer called her voice manly. He said her voice would sound like a man singing for an actress. She added that such incidents made her mentally strong and she didn’t lose her spirit. It should be remembered that she was still very young, in her late teens, when she entered the industry. When the songs of the movie, Mast became popular, she was 16.

Her initial songs were mainly dance numbers, item numbers, but very soon she sang all types of songs. From romantic, sensuous to item songs. She can sing songs of all genres. If she is popular for item numbers like Sheela Ki Jawani or dance numbers like, Aaja Nachle, you will find her proficient in songs like, Mere Haath Mein Tera Haath Ho or lesser known one from Chameli, like Bheegi Hui Koi Shaam Woh. If her singing, Ek Nazar Mein Bhi Pyar Hota Hai enchants you, you love her for her singing in folk based song, Bumbro Bumbro. I had all these songs on my long list, but dropped later. And if you are missing something, I’ll present her Sufi andaaz in Tere Vaste Mera Ishq Sufiyana.

I’m mainly inclined to the golden era of Hindi cinema, but a few of the contemporary singers are my favourites. Sunidhi is certainly one of them. I wish her a very happy birthday and dedicate the post to her.

Without further ado, let me present ten of my favourites by Sunidhi Chauhan, in no particular order.

1. Mehboob Mere Mehboob Mere – Fiza (2000) with Karsan Sargathiya / Anu Malik – Tejpal Kaur
The song with a folk touch was very popular during its release. Sunidhi was a new sensation and her style of singing, amazing tonal quality was making the youth crazy about her songs. In addition to the catchy beats of the song and Sushmita Sen’s dance, Sunidhi’s intoxicating voice creates a magical aura. Our Indian ears are used to thin and high pitched voices, and Sunidhi’s voice stood completely unconventional. The feel of her voice at high notes causes goosebumps. And her voice is difficult to imitate. A perfect song to start my list!

2. Kaisi Paheli Zindagani – Parineeta (2004) with Chorus / Shantanu Moitra – Swanand Kirkire
While songs of Shreya Ghoshal from Parineeta were popular, Sunidhi’s only song for the movie was equally popular. Rekha’s elegant dance and Sunidhi’s sensuous voice make a perfect combination. And no one can sing it the way Sunidhi has sung it. A valid point is that such songs may sound vulgar if the expressions are not apt, there’s a thin line between vulgarity and sensuality. Sunidhi’s rendition has never ever crossed the line. It’s never been vulgar.

3. Dhoom Machale – Dhoom (2004) / Preetam – Sameer
The song needs no introduction! I’ve memories of my post graduation days with this film. It was extremely popular. It rained heavily when we went to watch it and the theatre was full of whistles and shouting noises when this song opened on screen. Sunidhi was obviously a perfect choice for the song. She rocked! The song was so popular that the future parts of the film also had versions of the song. But the magic of the first part of the song couldn’t be repeated.

4. Bhaage Re Mann – Chameli (2004) / Sandesh Shandilya – Irshad Kamil
What a versatile singer. How beautifully she modulated her voice. It’s one of my favourites. When I heard the song for the first time I was amazed at her soft and thin voice. The album has only Sunidhi as a female playback singer, and the other songs are my favourites too. I think Bheegi Hui Koi Shaam Woh isn’t very popular, but it’s a good song.

5. Beedi Jalai Le – Omkara (2006) with Sukhwinder Singh / Vishal Bhardwaj – Gulzar
Sunidhi received her first Filmfare award for the song. What a wonderful rendition, such apt expressions.
It was hugely popular, and received criticism as well. The song was taken as a sign of annihilating cultural values in Hindi films. The film and the songs however became popular. And a song sung during such a नौटंकी can’t be a sophisticated song! Singing such songs is not easy, and Sunidhi always maintained her dignity, never sounding vulgar.

6. Uuf Kya Jaadoo Mohabbat Hai – Uuf Kya Jaadoo Mohabbat Hai (2004) / Sandesh Shandilya – Mehboob
After Chameli, Sandesh Shandilya offered a couple of songs to Sunidhi again, who made the most of it. The title track must be listened to just for her amazing voice, though the orchestration is great too. The expressions, the delicate touch to the voice, the laughter, are top notch. Though the film wasn’t successful at the box office, the song remained my favourite.

7. Dil Mein Jaagi Dhadkan Aise – Sur (2002) / M M Kreem – Nida Fazli
The song fills our heart with energy and exuberance. Even if it’s not a dance number, Sunidhi pours out her liveliness and makes us dance. I’m a big fan of this song and it always inspires me. Her breathless singing in mukhda is wonderful.

8. Dekho Na – Fanaa (2006) with Sonu Nigam / Jatin Lalit – Prasoon Joshi
One of my most favourite romantic rain songs. I don’t want to repeat myself, but her soft voice is so amazing. She has sung a number of duets with Sonu Nigam, right from Mast. Her duets with Sonu from Jungle are very popular too.

9. Udi Neendein Aankhon Se – Guzarish (2010) / Sanjay Leela Bhansali – A M Turaz
I haven’t watched the movie, so it’s better to talk only about the song. The song has good orchestration, good tune, good lyrics and above all, Sunidhi’s flawless rendition.

10. Sajna Ji Vari Vari – Honeymoon Travels Pvt Ltd (2007) with Shekhar Ravjiani / Vishal Shekhar – Javed Akhtar
I know nothing about the movie except the song! I loved the song the moment I heard it. It’s so energetic and lively. You can’t escape its effects. You start tapping your feet, start humming it and feel joyous. The beats are so catchy and infectious. And of course, it’s Sunidhi’s magical voice which takes the song to another level. What a song to end the list!

I have left out many songs, because I wanted to limit the list to ten songs. Please add your Sunidhi’s favourites.