Welcome to the second part of the post, Songs with ‘Train rhythm’. The first part had songs picturised on a running train, supported also by the train rhythm, from black and white films. I present today the second part which will focus on the songs from colour Hindi films.
As the Hindi films progressed from BnW to colour, technology had also advanced. In the 70s and 80s, shootings actually took place on a real train and the set of a wooden compartment slowly vanished. Similarly the recording techniques also improved with more and more advances. 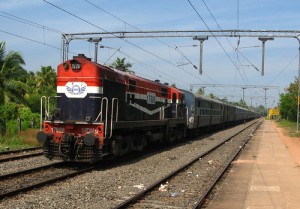 The trains also transformed slowly from the steam locomotive to modern engines. The electrification of trains started as early as in the 1960s, when most of the electric and diesel engines were introduced in the Indian railways and slowly steam locomotives vanished. Still till the mid 70s, steam engines ran in India. But as life became more and more faster, trains had to follow the norm. With the fast speed, the train compartments and the wooden benches also underwent modernisation. The clickety clackety of the trains however remained. And the whistling or the horn of the train also continued.

The last post had songs till 1963, though black and white films continued till 1970. Today’s post focuses on colour Hindi film songs. I decided to go further till the 2000s. While I was very strict for the first part, this time I’m very lenient. And the majority of the songs on the list have some or the other distinguishing point. And I tried to follow the rules, though I bent them to allow a few variations of the theme. In fact the main reason to go for a second part was to allow the variations.

So let’s start the journey in chronological order.

1. Mere Sapno Ki Rani Kab – Aradhana (1969) Kishore Kumar / S D Burman – Anand Bakshi
Though Rajesh Khanna is not traveling on the train, I couldn’t ignore the iconic song. Sharmila Tagore is traveling in the toy train, apparently reading a book. But she is more interested in the men who are traveling in an open Jeep, one of them singing a song. Interestingly the tracks of the two locomotives run parallel to each other, giving an opportunity to the interested parties to have a good look at each other. It’s clearly evident that Sharmila Tagore’s scenes are shot in a studio, and then the outdoor scenes are mixed later. It must have been difficult for Sharmila to act shy and demure in the absence of anyone. The train rhythm is very clear and the train whistles also add a life to the song. The song was very popular and the film boosted not only Rajesh Khanna’s career, it also started Kishore Kumar’s successful second innings as a playback singer. This is the first varaition of the theme, the singer is not traveling in the train.

2. Phoolon Ke Rang Se – Prem Pujari (1970) Kishore Kumar / S D Burman – Neeraj
The second song on the list by the same duo, Kishore Kumar and Burman Da. Though the song is not entirely picturised on a running train, I included it as a variation. It’s an iconic train song, beautifully rendered and excellently written. The train rhythm is somewhat different from the other songs. The song is picturised on a running train in Switzerland.

3. Hum Dono Do Premi – Ajnabee (1974) Lata Mangeshkar & Kishore Kumar / R D Burman – Anand Bakshi
It’s now junior Burman’s turn. While I wasn’t a fan of the song earlier, it’s not bad either! Picturised on a good’s train, it seems the couple has planned to elope. They are with their suitcases, placed on another cart. Though it’s not a passenger train, the couple is inside an open carriage with the hay grass. It’s mainly the catchy train rhythm that does the trick for me, the lyrics are otherwise not very appealing. The variation is that the couple is not in a passenger compartment.

4. Gaadi Bula Rahi Hai – Dost (1974) Kishore Kumar / Laxmikant Pyarelal – Anand Bakshi
This part of the series has compelled me to allow a lot of exceptions on the list. This one’s one of those. The song is picturised on a running train and it has a train rhythm too, but it’s with a variation. It’s a background song in addition to being a credits song. The singer is anonymous, no one is shown to lip sync to it. A very good philosophical song with a catchy train rhythm. The train whistles make it very close to one’s heart. We all have an emotional connection with the train whistle, don’t we?

6. Dhanno Ki Aankhon Mein – Kitaab (1977) R D Burman / R D Burman – Gulzar
A train driver, played by Ram Mohan, is reminiscing about his beloved Dhanno. Is it the lady with a lantern, Dhanno? Hasn’t the song got a different sound than others? A different orchestration! Pancham da was always innovative, when it came to trying a new style or instrument! Though I’m not a fan of his voice, it does suit the occasion. It was a great thing that both the Burmans knew which songs would suit their voices. Both of them never insisted on the main lead’s playback. A few of today’s composers fail to do that.

7. Hoga Tumse Pyara Kaun – Zamane Ko Dikhana Hai (1982) Shailendra Singh / R D Burman – Majrooh
Such a cute song! I like the train rhythm and the whistle of the train in the song. It really has a wonderfully catchy rhythm. Thanks to Chitrahaar for introducing it to my generation. It’s the only song on the list, where the singers are sitting on the train roof rather than inside a compartment. While only a few scenes were picturised outdoors, the majority of the song was shot in a studio. The long shots on the train roof were obviously shot with body doubles. Enjoy the song, the couple really looks great.

8. Haathon Ki Chand Lakiron Ka – Vidhata (1982) Suresh Wadkar & Anwar / Kalyanji Anandji – Anand Bakshi
Two friends in the driver’s carriage of the train talk about Taqdeer and Tadbeer. While one of them believes in destiny, the other believes in himself and his ideas. The song talks about life from the perspective of both the characters. While Anwar singing for Dilip Kumar sounds alright, Suresh Wadkar’s soft voice doesn’t suit Shammi Kapoor at all in my opinion. The song actually hasn’t got a typical train rhythm throughout. The opening music, interludes and ending has got the rhythm, whereas the verses have a different rhythm that can be taken for a train rhythm.

9. Chhaiyan Chhaiyan – Dil Se (1998) Sukhwinder Singh & Sapna Awasthi / A R Rahman – Gulzar
The song needs no introduction. Picturised on the Nilgiri Mountain Railway train, the song achieved immense popularity on its release. The song was choreographed by Farah Khan, who received the best choreographer award at the annual Filmfare. The song is based on Sufi music and Shah Rukh Khan and Malaika Arora Khan dance on the train rooftop and other open carriages with other dancers. The song has a catchy train rhythm and the scenery and beautiful cinematography make it a visual treat.

10. Kasto Mazza Hai – Parineeta (2005) Sonu Nigam, Shreya Ghoshal & Chorus / Shantanu Moitra – Swanand Kirkire
A very good romantic song, I think again shot on the toy train. As the story goes in the pre-independence era, the look is quite different. The song has a good and catchy train rhythm and the singers have done a great job.
The opening lines are, I believe, in Nepali. It means, it’s fun to be in a train when it goes up and down through the hill. (Translation courtesy – filmyquotes.com)