Last year I published a series of female duets picturised as dance numbers. The series had five parts covering the dance duets under various categories.

While I was compiling the lists, I could identify a different subset of female duets that were picturised on two actresses but those were not dance numbers. And the duets had a different subject.

The heroine and her friend(s) are roaming around, say in a garden and one of them teasing the other. Obviously the supporting actress teasing the lead actress or both teasing each other. Mostly they talk about their beloved and try to pull each other’s leg. Both of them would be together. Sometimes one of them pours her heart out highlighting the agonies of falling in love. And suggest or advise the other to stay away from love. Dance may or may not be a part of it. Mostly there would be just two of them, but occasionally a small crowd of friends would be there and their leader would do the needful. Stage performances, Street performances won’t be a part of it. The lyrics should be directly addressed and not suggestive. So the songs like Chup Chup Khade Ho, where a couple of street dancers are singing, and they are not directly addressing Suraiya, are not a part of the post. Similarly the song has to be a duet, one singer and chorus won’t do. 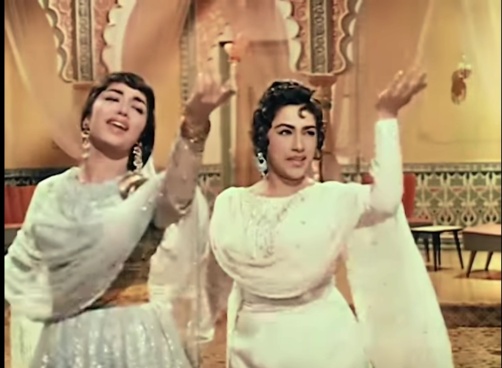 So without a further ado, let’s start the list. As usual the songs are from the pre-70s Hindi films and are in no particular order.

1. Janu Janu Ri Kahe Khanke Hai – Insan Jaag Utha (1959) Asha Bhosle & Geeta Dutt / S D Burman – Shailendra
Madhubala and Meenu Mumtaz singing and teasing each other. Both of them know each other’s secrets, who came secretly to her home, where she lost her bindi and so on. Such a playful and pleasant picturisation of two friends, who trust each other and can share things with. A very cute song! Both the girls look beautiful, their smiling faces steal your heart. Sunil Dutt and Sundar are watching them too. Their arrival is not unexpected, the girls go crazy and bewildered. A delightful song!

2. Thandi Thandi Hawa Puchhe Unka Pata – Johny Walker (1957) Asha Bhosle & Geeta Dutt / O P Nayyar – Hasrat Jaipuri
The cool breeze asks for her beloved whereabouts, but Shyama is too shy to express it. Her friend, Sheila Waz, expects her to confide in her and tell the whole story. She’s wondering how handsome he would be, if Shyama herself is so gorgeous. Shyama metaphorically calls him a delightful starry sky and adds, even the stars aspire for him. Sheila demands for his photograph, as she is very desperate by now.
An absolutely delightful and melodious song with typical O P styled orchestration.
Pretty looking Shyama and Sheila Waz roaming around in a garden, singing and occasionally bursting into dance. I guess the song has a waltz rhythm and subconsciously we start following it.

3. Ae Kash Kisi Deewane Ko – Aaye Din Bahar Ke (1966) Asha Bhosle & Lata Mangeshkar / Laxmikant Pyarelal – Anand Bakshi
A slightly changed conversation between the two friends. One of them desperately wants to fall in love, while the other warns her against it. Perhaps her own bitter experiences compel her to do so. She thinks, falling in love makes you miserable, your beloved would be very rude, almost wishing you to hate your own self. Any other blunder in the world would be forgivable, but not falling in love. But the other friend still longs for it, she’s agreeable to the pros and cons of love. Brilliant performances by Asha Parekh and Nazima. Nazima’s enthusiastic attitude almost makes Asha forget her sorrows.
Very apt lyrics, and memorable performance by the Mangeshkar sisters.

4. Ankhiyan Bhool Gayi Hai Sona – Goonj Uthi Shehnai (1958) Lata Mangeshkar, Geeta Dutt & Chorus / Vasant Desai – Bharat Vyas
Beautiful Amita is mesmerized by Rajendra Kumar’s Shehnai. She has lost her heart to him. A gang of her friends led by Jeevankala pokes her about it. She speaks about their secret rendezvous, the effects of Shehnai and Shehnai wala. But Amita doesn’t get irritated, she very playfully defends herself. The song, its opening music and tune, its lyrics and picturisation all are good. It is a must for my list.

5. Kya Hua Yeh Mujhe Kya Hua – Jis Desh Mein Ganga Behti Hai (1960) Asha Bhosle & Lata Mangeshkar / Shankar Jaikishan – Shailendra
While in most of the songs, the heroine doesn’t confess her love, here Padmini herself declares her confusion and sings about her weird behaviour. She has all the cardinal symptoms of falling in love. Chanchal is smart enough to diagnose the disease and insists her to disclose his name. But wise Padmini ignores the hints. The teasing goes on throughout the song and the other friends also join Chanchal. It’s a pleasure listening to it, and interesting to watch as well. Simple dance steps and very refreshing and natural smiles on their faces.

6. Dil Le Gaya Ji Koi Dil Le Gaya – Sanam (1950) Suraiya & Shamshad Begum / Husnalal Bhagatram – Qamar Jalalabadi
If Padmini was tangentially suggesting her falling in love, Suraiya appears bold enough to declare her love. She clearly mentions someone stealing her heart away and leaving a sorrow that feels lovable. Then it’s very obvious that her friend teases her about it.
Once upon a time a slim and beautiful Meena Kumari was a newcomer and did a few supporting roles. This is one of those. Suraiya was a singing actress herself, and Shamshad lent her voice to Meena Kumari. A delightful song, even though the tune and the lyrics are commonplace.

7. Gori Itna Bata Tera Lagta Hai Kya – Toofan Mein Pyar Kahan (1966) Lata Mangeshkar & Usha Mangeshkar / Chitragupt – Prem Dhawan
I could get only an incomplete, average quality video. Her friend (whom I couldn’t recognize) asks Nalini Jaywant to make it clear who the latter dreams of. Nalini Jaywant shyly refuses the proposal. An impressively fast flowing river among the rocks makes it an interesting watch. I’m adding the Audio link, for those who want to listen to the full song.

8. Hum Panchhi Mastane – Dekh Kabira Roya (1957) Lata Mangeshkar & Geeta Dutt / Madan Mohan – Rajendra Krishan
Here there are Do saheliyan, but as a refreshing change, they are not teasing each other. They are not talking about their love or beloved. But they are singing about their dreams and their ambitions. They don’t talk about making a place in their beloved’s heart, but aspire for their own identity and a definite place in society. They want to create a world of their own. To top it all, the song has pleasant whistling and two gorgeous ladies, Shubha Khote and Anita Guha. Such a carefree and simple attitude towards life. I love the song.

9. Jab Ishq Kahin Ho Jata Hai – Aarzoo (1966) Asha Bhosle, Mubarak Begum & Chorus / Shankar Jaikishan – Hasrat Jaipuri
A variation of the theme. There are ‘do saheliyan’, but the main lead, Sadhana, is not singing or dancing. Her two friends, Nazima and Daisi Irani, are teasing her. They believe she is in love with Feroz Khan, who’s Nazima’s brother. Actually Sadhana is worried about the absence of Rajendra Kumar, but her friends know nothing about it. So the two friends with their entire gang irritate her no end. Finally Sadhana becomes furious.
A popular song from the movie. A fusion of qawwali and western music. It is said that it was the only song composed by Shankar, the others were composed by Jaikishan.

And to end the list, let’s visit a fantasy world.

10. Sharmake Zara Ae Mast Ada – Aladdin Aur Jadui Chirag (1952) Shamshad Begum & Asha Bhosle / S N Tripathi – Anjum Jaipuri
Here we have a tale from the Arabian Nights, that of Aladin and a magical lamp. I am treating it as a variation or extension of the main theme, because a Royal Princess is not allowed to mix up with a commoner. She can only communicate with her lady in waiting and other maids in her palace. So the Princess treats the lady in waiting as her close friend. So she is the leader of all the maids in the princess’s room and takes the lead to tease her. In this case, the Princess Badar, Meena Kumari encounters Aladdin accidentally and both of them get attracted to each other. The maids tease her as she appears self absorbed and engulfed in her own thoughts. A cute song with a foot tapping rhythm. Interestingly, Asha Bhosle was a relatively new playback singer, and she sings for the supporting character, while popular singer Shamshad Begum sings for Meena Kumari. A slim and young Meena Kumari looks beautiful.

I know there are many more duets fitting the theme. Would you add your favourite?