Last week, we had a look at Kaifi’s songs with three of the composers, those could be said to have a long and successful association with him. But he has worked with nearly all the composers, right from S D Burman, with whom he started the Hindi film career, to Ghulam Mohammad, to Laxmikant Pyarelal. And from Bappi Lahiri to Anu Malik. 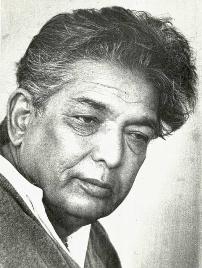 As I said in the previous part, after a good start with Burman da, he could not get offers for ‘A’ grade films, but due to financial constraints, he had to continue writing. For a long period, he could not get a good break, till ‘Lala Rookh’, where he also wrote the screenplay. Later he was screenplay and dialogue writer for a few movies. The songs from ‘Lala Rookh’ were popular and brought fame, but didn’t help him much to get ‘A’ grade movies. After writing the songs of ‘Kagaz Ke Phool’, he wrote light hearted, playful songs, even comic songs for Burman da in ‘Apna Haath Jagannath’ and I’m very fond of a couple of songs from the movie. Similarly he wrote for ‘Ek Ke Baad Ek’.
When Haqeeqat was released, I think, all the industry noticed his excellent and touchy lyrics. As a result in late 60s and in 70s, he worked with all the composers. The popular songs and my favourites have been included in the list.

His work as a lyricist would always be remembered for its content, quality, simplicity and idealism. He never used cliches in his songs. Even if he wanted to project anger, the song would still be graceful and without unnecessary loud phrases. His poem, ‘Doosra Banwas’ is a controlled expression of his emotions on the sensitive issue of 6th December incident.
His non film poetry is equally enchanting and has the same amount of emotions and dedication. He maintained the same poetry in his film songs too! His poetry books, ‘Zankar’, ‘Awara Sajde’, ‘Aakhir e Shab’, ‘Sarmaya’, ‘Kaifiyat’ were acclaimed. He was a great shayar and poet.
He acted in Naseem in 1995, a brilliant performance. His role of a grandfather, was memorable and was very much acclaimed.

So Let’s go the song list, as usual the songs are in no particular order.

1. Bichhade Sabhi Bari Bari – Kagaz Ke Phool (1959) Rafi / Music – S D Burman
No other lyricist could have done justice to Kaagaz Ke Phool, the way Kaifi Azmi did! Such sublime lyrics. At least a couple of his master pieces featured in the movie. While, ‘Waqt Ne Kiya’ portrayed the tension in the relationship of the protagonists, the mentioned song rings even more real, when it came to the person entering the world of cinema. People remember you like you,follow you, when you are successful! and once your downfall starts, no one even cares if you are alive or dead! It’s the rule of the industry. Then why should Suresh Sinha (Guru Datt’s character) be an exception? You get many people around you, till you have an authority, later you are not even recognised!
उड़ जा उड़ जा प्यासे भँवरे, रस ना मिलेगा ख़ारो में,
काग़ज़ के फूल खिलते हो जहाँ, बैठ ना उन गुलज़ारो में।

Both the parts of the song, grow on you. You can’t escape its impact!
Here’s the part I

And, the part II

2. Chhai Ghata Bijali Kadki – Apna Haath Jagannath (1960) Asha Bhosle & Kishore Kumar / Music – S D Burman
After, ‘Kagaz Ke Phool’, Azmi was with Burman da for a couple of movies. The movie, ‘Apna Haath Jagannath’ was not a serious type, and Azmi could explore lighter, playful side as well! Many of us are familiar with the song, have we ever thought of it as Kaifi’s song? A playful number, the couple naughtily teasing each other. A song that sounds as if the couple is conversing with each other. But still it’s full of fun and the lyrics, though casual, are not banal. It’s one of my favourite songs by Burman da, though I couldn’t include it in my earlier posts on him.

3. Chali Yeh Fauj Hamari Re – Ek Ke Baad Ek (1960) Rafi / Music – S D Burman
Burman da again chose Kaifi for ‘Ek Ke Baad Ek’, which unfortunately was a disaster at the box office. The songs were not so impressive, but the children’s song did catch my attention. Kaifi tells a story of two brothers in the song, which is fun! It has all the elements of a children’s fun song. Again not a song, someone would generally expect from Kaifi Azmi.

4. Chalte Chalte Yunhi Koi – Pakeezah (1972) Lata Mangeshkar / Music – Ghulam Mohammad
He shared the film with other lyricists. But the mention of Pakeezah, makes us remember ‘Chalte Chalte Yunhi Koi’, as it happens to be the most popular song from the movie. The most famous and meaningful verse from the song,
“जो कही गई ना मुझसे, वो ज़माना कह रहा हैं
के फ़साना बन गई हैं मेरी बात टलते टलते।”
highlights the emotions of the character, ‘Sahib Jaan’ so well!

5. Ek Jurm Karke Humne – Shama (1961) Suman Kalyanpur / Music – Ghulam Mohammad
What a Ghazal! The pathos touches our soul! Again, a song rich in Urdu words. So difficult to understand. Nimmi portrays a lady, who sacrifices her love. But the circumstances are not easy for her. She is trying to keep him away from her thoughts, but fails to do so! And what an interesting thought in this verse,
ये सोचकर बुझा दी, खुद शमा आरजू की
शायद हो रोशनी में मुश्किल नज़र मिलाना।

6. Baithe Hai Rehguzar Par – 40 Days (1959) Asha Bhosle / Music – Babul
A beautiful composition, wasted as a credits song! Again a song with deep pathos! A lady awaits her love, “He may realize my agony, he may come anytime” she thinks to herself. The stars await stand still in the sky, the dew drops have frozen on flower petals, as if they were tears. He may be back for someone else, but at least he will! Very touchy, and sublime lyrics.

7. Aaj Ki Kali Ghata – Uski Kahani (1966) Geeta Dutt / Music – Kanu Roy
Reminds me of ‘Koi Chup Ke Aake’ from Anubhav. I could not exactly grab the mood in the song. She is desperate, she is unhappy, but hopeful! Though she is not ready to accept the fact, her mind wants to come out of the grief. So I experienced, an ironic mixture of sadness & hopeful cheerfulness! I don’t know if my interpretation is correct or not, and I have no idea of the situation in the song.

8. Zindagi Hai Kya Bolo – Satyakam (1969) Mukesh, Kishore Kumar & Mahendra Kapoor / Music – Laxmikant Pyarelal
I was about to choose, ‘Do Din Ki Zindagi’, when I thought of giving this song a try! And what a great surprise! Such a delightful fun song, with a touch of philosophy too. I thoroughly enjoyed it. While the majority of the song is light hearted fun song, Mukesh’s part (lip synched by Dharmendra) teaches us. All the singers perform their parts very well.

9. Tu Shokh Kali Main Mast Pawan – Main Suhagan Hoon (1964) Asha Bhosle & Rafi / Music – Lachhiram
Azmi shared this film with other lyricists, and like Pakeezah, the most popular and memorable song belongs to him. The song appears twice in the movie. The duet appears first, as a cheerful romantic song between Mala Sinha and Ajit. Later the solo version, sung with intense passion makes appearance. Though Kewal Kumar sings it with an expressionless face and sleepy (अर्धोन्मिलित) eyes, it is very much enjoyable to listen to. The solo leaves a greater impact of course.
The verses are same, except that the solo version has a third stanza and a opening verse in addition. Here’s the duet

And,
The solo version,

10. Mile Na Phool To – Anokhi Raat (1968) Rafi / Music – Roshan
Such a simple logic it seems! When I could not get flowers, I was friendly with the thorns. But such a deep thought it actually is! Kaifi’s only songs for again winning the hearts of the audience. His communist idealism also appears here to some extent.

11. Badal Jaye Agar Mali – Baharen Phir Bhi Aayengi (1966) Mahendra Kapoor / Music – O P Nayyar
A song of optimism. The garden is not deserted, if the gardner changes! It still blooms, someday! The spring has to come back, and surely it does! His idealism also appears in the song, Dharmendra advises a labourer to go ahead with his job, without getting tired. He should follow his dreams and he is sure to achieve the goal.
It’s one of the earlier songs of Mahendra Kapoor with O P Nayyar. And I have always looked at it as if, it suits the rift between Rafi & Nayyar. Let the singer be changed, O P’s songs will continue to bloom. The songs will still be hits.

12. Yeh Raat Hai Pyasi Pyasi – Chhoti Bahu (1971) Rafi / Music – Kalyanji Anandji
The couple wishes a few moments of romance. Even though it’s very romantic, such a gentle and delicate lyrics. Such songs often turn predictable with a lot of clichés. But here, a difference, we can definitely experience!

13. Peetal Ki Meri Gagari – Do Boond Pani (1972) Parveen Sultana & Meenu Purushottam / Music – Jaidev
A beautiful folk song. I agree, the tune and the orchestration catches more attention, but the lyrics also suit the background of the film. I am very much fond of the song, since the day, I heard it for the first time. As I always say, a song wins the battle, when it excels in all the three fronts, including lyrics.

14. Hone Lagi Hai Raat Jawan – Naina (1973) Asha Bhosle / Music – Shankar Jaikishan
The song sounds like a mujra. Again his only song from the movie. For Shankar Jaikishan, he mostly wrote only a song per film. And SJ had lost all of the charm and magic. Asha Bhosle was awarded Filmfare Best Singer for the song.

15. Tum Itna Jo Muskura Rahe Ho – Arth (1983) Jagjit Singh / Music – Jagjit Singh
A cute coincidence, when Kaifi wrote for his daughter. The song list can never be complete without this song. Shabana excelled as well with her expressions, highlighting the depth of the composition.

Disclaimer –
Mehfil Mein Meri, claims no credit for any image, screenshots or songs posted on this site. Images on this blog are posted to make the text interesting. The images and screenshots are the copyright of their original owners. The song links are shared from YouTube, only for the convenience of music lovers. The copyright of these songs rests with the respective owners.