The rough idea of this post was with me for a few months. A few weeks back, one of my friends shared photos of his recent holiday to seaside. Then suddenly, wheels started churning in my mind. “Oh! I have one incomplete song list on this theme”. I worked on it and here I’m! 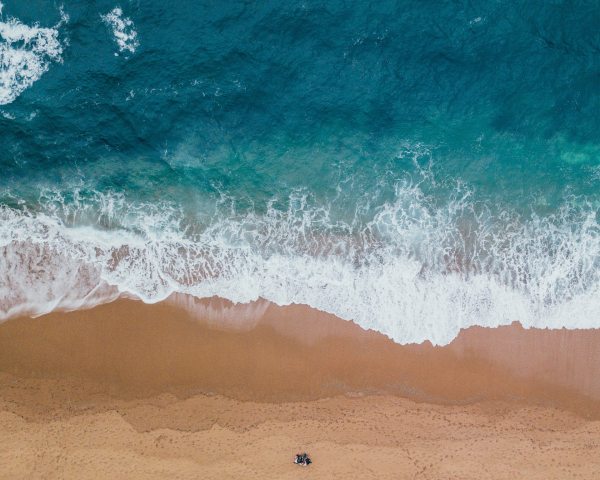 As the Hindi film industry was firmly settled in Mumbai (then Bombay), it was but obvious that the sea shore and the beaches would appear in the songs. During the Golden Era, most of the films were shot at the studios and only some of the songs were picturised outdoors. This must have started in early 1950s, in my opinion. Of course this must have brought more realistic approach to the picturisation. Also there were no unnecessary skimpy clothes and most of the songs till 1960 had a reasonable decency in picturisation. Next decade saw a comparatively decent exposure by actresses like Helen, who always maintained a standard. Her expressions were never vulgar and lustful, even in a seductive song, and not needless to say, her clothes also used to be decent, as per character’s demand.

The beach or the sea shore made its appearance in romantic songs, picnic songs, for obvious reasons. But you will find some soulful, emotional songs as well on my list. The waves sticking the rocks, making a huge splash have been metaphorically used as emotional explosion, a character undergoes, like a sudden outburst of cry, that helps drain the frustration. The conflict gets highlighted more effectively. On the other hand, slow and peaceful waves, are shown to have calming influence. There are songs, where a family is enjoying happily and denotes the delightful moments of their life. So the seashores are not only for romantic songs, but other songs have also been picturised there. 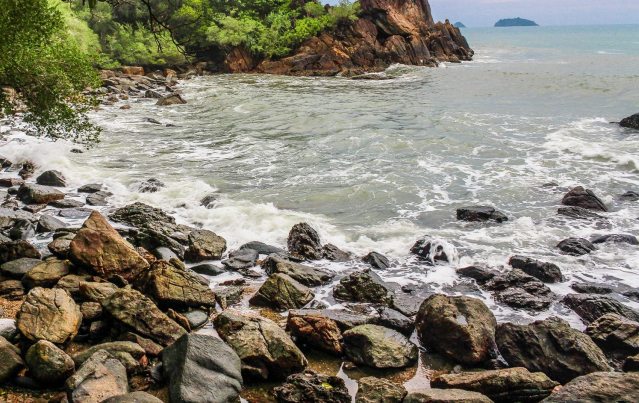 Due to lack of sophisticated cameras and equipments, there are comparatively less number of seashore songs, from films of 50s-60s. More so in 1950s. But the 70s and 80s films (Seeta Aur Geeta, Raja Jani, Sagar, Yashwant etc.)portrayed the beach quite effectively. The sea shores were used for songs, but also for climax scenes and dhishum dhishum scenes. The ultimate capture of the villain, who’s about to escape by sea route, (or something on the similar lines) has been a climax for a number of films. The Girgaon Chowpatty, Juhu Beach and lately, Madh island can be counted as favourite shooting locations for a beach. Also many foreign beach locations have found place in picturisation of the songs.

From, ‘Sagar Kinare Dil Ye Pukare’ and ‘Hum Tumhe Chahte Hai Aise’ to ‘Tanha Tanha Yahan Pe Jeena’ from Rangeela and ‘Anjana Anjani’ from Yuva, the beaches have proved a spectacular location. Of late, the beauty of nature is sparingly found in a beach song, everyone is going after ‘other’ type of beauty.

The beaches and their security and cleanliness on the beach are now a days matters of concern. The tourists always forget that the sea and the beaches are also homes for living animals and we need to keep them clean to protect their natural habitat. But self centered people tend to forget about their responsibilities to the society. We’re part of a society and each and every person should follow good habits, to keep our city, our environment and hence the nation clean. We must give back to the society we live in. The explosive use of plastic over a few decades, has created disasters along the seashore and consequently the marine life is seriously affected. And indirectly, we get affected by consuming fishes and other marine food. No one even thinks of this heaith hazard! We must therefore do our bit and keep our sea sides clean so as next generation could enjoy it, as we are able to.

Anyways, on a lighter note, let’s enjoy the melodious songs that are picturised on a seashore or a beach. As always the songs are from the films of 50s-60s-70s. So without a further ado, let’s go seashore!

1. Sach Hue Sapne Tere – Kala Bazar (1960) Asha Bhosle / S D Burman – Shailendra
I start the list with this delightful song from Kala Bazar. The sea shore and the rocks along with the waves, make it a beautiful location for the song. The tidal waves crashing on the rocks, scattering the water droplets is a delightful site to watch.
He appears worried and perplexed over something, she is trying to lift his spirits. Indeed, Waheeda Rehman, in a simple saree, without any jewelry at all, with a simple hairdo looks stunningly gorgeous. Such a grace and elegance, as she does ‘chiki chiki chik chak’. Her encouraging gestures finally appear to work for him, who finally smiles at her.

2. Dil E Dil Baharon Se Mil – Ek Phool Char Kaante (1960) Lata Mangeshkar & Talat / Shankar Jaikishan – Shailendra
Waheeda Rehman’s charming magic continues on the list, with the song from ‘Ek Phool Char Kaante’. The song opens on a pleasant seashore where Sunil Dutt and Waheeda are sitting. The song starts suddenly as if the couple was waiting for a signal. Sunil Dutt moves about and dances very awkwardly, in (God knows why?) a formal wardrobe. The focus then shifts to coconut plantations nearby the beach and the beach is visible in a distant background. Though I’m a fan of Talat’s voice, for me, his rendition is not impressive in the song.

3. Roun Main Sagar Ke Kinare – Nagina (1951) C H Atma / Shankar Jaikishan – Shailendra
One of the earliest songs, shot by the seashore. Of course only long shots and the sea waves are in the song, that are shot on outdoor location. The close ups of the actor, Nisar Khan, must have been shot indoors. The conflict and the deep anguish of the character is shown very effectively with the waves hitting the rocks. The orchestration during these scenes also intensifies the tension in the song. Some of the verses are addressed to the sea itself.
This is certainly one of the best known songs of C H Atma. He was a huge fan of K L Saigal and tried following his footsteps. But with the introduction of new singers with original voices, he was thrown away from playback singing. It is said that, he even openly used to quote this song for his own condition. He really had a home by the sea shore and used to find the lyrics of this song, fitting his own misfortune.

4. Is Duniya Mein Jeena Ho To – Gumnaam (1965) Lata Mangeshkar / Shankar Jaikishan – Hasrat Jaipuri
Helen dancing gracefully by the seashore. The sea is calm with soft waves. The rocks, the sand, the umbrella with other accessories complete the picture of a perfect picnic by the sea side. Helen tries to ease the tense atmosphere on the isolated island. The sequence of murders one after the other has left everyone horrified and suspicious. No one can enter or leave the island, so the murderer has to be one of the members in the house. The songs could have provided a few moments of relief to the terrified audience (I haven’t seen it)
Based on Agatha Christie’s novel, ‘And then, there were none’, the movie had a haunting melody (Gumnaam Hai Koi) too! If you haven’t read the novel, do read. It’s full of horrifying surprises, and twists-turns. Though at the end, the suspense doesn’t feel that breath taking, it’s definitely worth reading. A must for Agatha Christie fans.

5. Jane Jigar Yunhi Agar – Mujrim (1958) Asha Bhosle & Rafi / O P Nayyar – Majrooh
A romantic song, with Shammi Kapoor and Ragini. The song opens on a seashore, but later other locations near a beach, also make their appearance, only to end the song on the beach with sunset. The interludes are so typically O P style. No one can miss it. The link from YouTube has poor audio quality.

6. Dhadka Hai Dil Mein – Jaal (1967) Lata Mangeshkar / Laxmikant Pyarelal – Raja Mehdi Ali Khan
Mala Sinha enjoying herself, confessing her love. A nice blue sea, rocks and waves folding smoothly across the shore. It looks so peaceful. The green plantations, a perfectly blue sea, dark rocks, clear blue sky, yellowish white sand spread over a long distance. A perfect beach to shoot! The only average thing is her attire, which looks like a night dress to me.
A good romantic song, hadn’t heard it before. The orchestration is so wisely and beautifully done.

7. Ek Pyar Ka Naghma Hai – Shor (1972) Lata Mangeshkar & Mukesh / Laxmikant Pyarelal – Santosh Anand
A family on the beach, enjoying and playing, but it’s an emotional song with the touchy notes of violin. The simple philosophy of life is depicted in the verses. Suddenly the family faces a grave accident, and breaks as if the happy days were a dream. One of the popular songs of Laxmikant Pyarelal, that is still remembered for its violin tune, the beach and actress Nanda.

8. Hothon Pe Inkar Thoda Thoda – Raat Ke Andhere Mein (1969) Rafi & Usha Timothy / Prem Dhawan – Prem Dhawan
Well! I agree it’s not a great song! It’s from an obscure film, Prem Dhawan penned songs and composed as well for. Perhaps, ‘Agar Bewafa Tujhko Pehchan Jate’, sung separately by Lata and Rafi, is a more famous song from the movie. But this one snugly fits the theme, so I thought why not? Rafi has sung it with just occasinal exclaimations by Usha Timothy. The beach is in focus for the majority portion of the song, with occasional skips to coconut trees.
Can anyone please tell me, who’s the actors are? Sonia Sahni was in the film, but I guess, she’s not in this song.

9. Aa Bhi Ja Bewafa – Raat Ke Rahi (1959) Asha Bhosle / Bipin Babul – Vishwamitra Aadil
Another less commonly heard and mentioned song from an obscure film. But the song is reasonably good, thanks to Asha Bhosle. A male voice also hums in between, difficult to identify. Jabeen Jalil trying to attract young Shammi Kapoor, with the sensuous song. The beach with its rocks and waves, provides a good background.

10. Zindagi Kaisi Hai Paheli – Anand (1971) Manna Dey & Chorus / Salil Choudhary – Yogesh
No one can miss this, on a beach songs list. Picturised on Juhu Beach (which used to be much less crowded that time), it portrays the beach to its full extent. The song is famous for its meaningful and captivating lyrics, and of course the beach with sea waves slowly folding on the shore. Nothing more to say!

(I intend to return with a similar post, but with the songs from later films.)

Disclaimer –
Mehfil Mein Meri, claims no credit for any image posted on this site. Images on this blog are posted to make the text interesting. The images and screenshots are the copyright of their original owners. The song links are from YouTube and have been used here only for the music lovers. The copyright of these songs rests with the respective owners.