I was eagerly waiting for the monsoon to set in and me writing this post about the rain songs. I think I am too late for this. Half of the monsoon is already over. But it’s better late than never.
It’s not for me to be romantic or poetic and go on about the beauty of nature, the luscious greenery and springs, dew drop etc.
In fact, monsoon is not my favorite season at all! One always has to think about the mud, the slippery roads, and the puddles and so on………………
But, old hindi film songs portray rain in a romantic and dreamy way, full of clouds, fountains, lakes, dew drops, heroine in wet clothes, accidental meeting of the lovers and much more.
A rain song in any Hindi film reveals an array of emotions like love, care, passion to blue mood, at times!
All the famous hindi film pairs have a popular rain song to their credit.

I never had any criteria for the songs, but I thought why not go for songs picturised in the rain, let it be for a part of the song or the entire length, from drizzle to showers! The song may not be about the rain itself.

So here we go, the songs are in no particular order-

1. Umad Ghumad Kar Aayi Re- Lata Mangeshkar & Manna Dey -Do Aankhen Barah Haath (1957) Vasant Desai-Bharat Vyas
A unique film by V Shantaram. This movie is about a jailor who belives that love and trust can win over anything and can make any criminal a good human being. Excellent songs by Bharat Vyas & Vasant Desai Duo. (This duo worked afterwards for mythological films as well, that obviously had very good music! I will write on Vasant Desai someday!)
This particular song is full of energy, without noisy orchestration and wise use of the instrument, Ravanahath (the one sandhya plays) 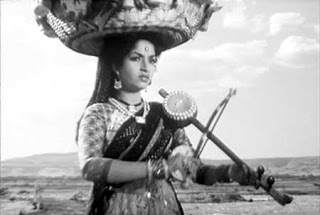 The pure hindi lyrics make us imagine the scenery and the picturisation.
We enjoy the rains in the first part of the song and the farming, right from ploughing, to sowing, to harvesting in later part of the song.
Manna Dey has very little to sing, but a great support!

2. Sawan Ki Ghatao Dheere Dheere Aana- Khurshid & Rafi -Aage Badho (1948) Sudhir Phadke-Amar Verma
After a tribute to Sudhir Phadke,in my last post, here is one more gem, from the same film.
It’s the only duet in the film. This was Dev Anand’s second film, & he had no songs in his first movie (Hum Ek Hai), so Rafi was the first to sing for him onscreen.
Rafi sounds a bit funny to us now, as the singing style was different in 1940s.
Very young Dev Anand looks a bit immature and Khurshid looks a bit too old for him.
He is asking the clouds to be gentle. His love is very delicate and may find thunder horrifying. But she assures him about her not getting scared of the rain!
But rain really pours down with thunder and she hugs him with fright! Enjoy this very romantic and melodious duet!

3. Hariyala Sawan Dhol Bajata Aaya- Lata Mangeshkar & Manna Dey -Do Bigha Zameen (1953) Salil Choudhary-Shailendra
Very enjoyable and memorable song from the movie. Shailendra was a gifted lyricist and poet. The song actually portrays celebration of the first rain and the metaphors used, make it more meaningful. The song shares its flavor with the first song in the list, telling about the rains and the prosperity, it brings.
This song was choreographed by Prem Dhawan, the famous lyricist, and what more! He himself appears dancing on screen.

4. Rimjhim Barase Pani- Meena Kapoor & Chorus -Pardesi (1957) Anil Biswas-Prem Dhawan
This Film, a joint venture by Indian & Russian film production houses, was based on a travelogue ‘A Journey Beyond The Three Seas” by Russian Voyager, Afanasy Nikitin. Music was one its strong points.
This one is definitely among Meena Kapoor’s best songs with Anil Biswas. This film also features Na Dir Dim Tana Der Na by Lata Mangeshkar and Rasiya Re Man Basiya Re by Meena Kapoor.
This particular song sounds like Marathi Folk song. Nargis plays a Maharashtriyan character in the film, as apparent by her costume.
The video song has only one stanza, the audio version has 3 stanzas, and I am sharing both.
Here also, Manna Dey has sung only one line at the end in the audio version.

5. Rimjhim Ke Yeh Pyare Pyare- Lata Mangeshkar & Talat – Usne Kaha Tha (1960) Salil Choudhary-Shailendra
A soft romantic duet, picturised in a gentle way, on a swing.
It’s one of my most favorite rain songs! Nothing more to say. Just enjoy!
It feels like you are actually enjoying in the rain!

6. Barkha Bahar Aayi- Lata Mangeshkar & Chorus -Barkha (1959) Chitragupt-Rajendra Krishna
A lesser known song from the movie. The movie starts with this song (after the credits), though there appears to be no direct connection to the story!
A average song, but worth listing in a rain song theme.

7. Barso Re- Khurshid -Tansen (1943) Khemchand Prakash-Pandit Indra
Now, an iconic song from 1940s. This K L Saigal (as Tansen) & Khurshid (as Tani, his beloved) starrer film was a huge musical hit of 1943. It has a number of gems by both the singers.
Khurshid, though not a trained classical singer, manages to sing this difficult song. It starts at a slow pace, but turns fast and high pitched at the end.
A little about the background of the song, Akbar asks Tansen to sing Deepak Raag for his sick princess. The candles light on their own as Tansen sings. But he feels the pain like getting burnt. The only answer appears to be the rain. Birbal, the court philosopher suggests to Akbar that a singer who can sing the Malhar raag (known for bringing heavy rain) should be searched for. Finally Tani comes to his rescue, sings Megh Malhar Raag and saves Tansen.
A rain song showing completely different mood! Though she sings for her love, it’s not a romantic song!
I don’t know how many of you would be able to relate to this song, which has a very slow tempo at the beginning, for about one and half minutes.

8. Kajare Badarwa Re- Lata Mangeshkar -Pati Patni (1965) R D Burman-Anand Bakshi
One of the early films by R D Burman. An enjoyable and catchy song.
A bit high pitched stanzas make it more interesting. Nanda, as a typical Indian housewife, looks gorgeous and is even shown doing laundry.
One of the good songs penned by Anand Bakshi, the metaphors used is quite adorable.

10. Rimjhim Gire Sawan- Lata Mangeshkar -Manzil (1979) R D Burman-Yogesh
The song is actually out of the blog’s timeline. But again my favourite, so I included it! One of the best songs by Lata- R D duo.
Its picturization in Mumbai (Bombay) of old days makes it more memorable & interesting. The Marine Drive with the roaring sea looks so beautiful!

Which favourite rain song do you want to add?